“Schwimmen” (English title: “Swimming“) by director Luzie Loose tells the story of Elisa and Anthea, two 15-year-old girls whose unequal friendship gives them support and orientation in a difficult phase of their lives. In order to maintain their cohesion, they develop an ominous game that takes on a destructive dynamic: After Elisa’s physical collapse, which is mercilessly filmed by her classmates* with their mobile phones, the two simply turn the cameras over in revenge. They are transformed from victims into perpetrators…

After the separation from Elisas (Stephanie Amarell) parents, the life of the 15-year-old gets out of joint. Together with her mother Anna, she has to move from the family home on the outskirts of Berlin to a social apartment in the middle of Berlin-Neukölln. Her body reacts to the stress with fainting spells. During such an episode after swimming lessons, your classmates* take Elisa’s vulnerability as an opportunity to make her a victim in class. At this moment Anthea (Lisa Vicari) enters her life. She is beautiful, self-confident and intrepid and quickly gets Elisa out of her defenceless rigidity. The two become best friends and develop a game in which they record everything they do with the cameras of their mobile phones.

Elisa uses her mother’s night shifts to go clubbing with Anthea and her older brother Pierre (Jonathan Berlin) and experiences an intoxicating summer with her new girlfriend. Anthea protects her, gives her self-confidence and stability. Both girls fill each other’s gaps caused by the separation from Elisa’s parents and the lack of affection in Anthea’s family. But Anthea always sets the pace.

Soon they come up with the idea of turning the cameras upside down and secretly filming those classmates* who have killed Elisa in a similar way out of revenge. In order not to appear cowardly in front of her, Elisa collects and sends out one compromising video after the other. Soon they need this game to maintain their cohesion and from their intimate friendship develops a destructive dynamic that becomes threatening for all who get in their way.

Luzie Loose was born in 1989 at the Baltic Sea and grew up in Berlin. She studied at the University of the Arts in Berlin and worked for renowned German cinema and TV productions, as assistant director at the theater and realizes her own film projects. She discovered the world through filmmaking and has already worked in Paris, Istanbul, Tokyo and Berlin.

Until spring 2018 she studied directing at the Filmakademie Baden-Württemberg. A scholarship also led her to the renowned La Fémis in Paris, where her short film “Nouveau Monde” was made, as well as the realisation of a short film within the framework of the Atelier Ludwigsburg-Paris with SWR and ARTE, which she was able to present at the San Sebastian Film Festival.

With “Swimming” Luzie Loose realized her first full-length feature film, with which she celebrated her world premiere at the Busan International Film Festival and was directly awarded the Gold Prize at the Hof Film Festival.

“In “Swimming” Elisa and Anthea experience their first really important friendship – their first great love. For me as a writer and director it’s about much more than that. I deal intensively and passionately with how children and teenagers grow up today. I observe that they grow up faster and faster in our ever faster spinning world. They are independent, educated and cosmopolitan – but they are also overwhelmed and disoriented. Elisa and Anthea belong to the first generation to grow up with the Internet, digital images and self-portrayal on the Internet. Taking an active part in the flood of images spread on the net is an important part of girls’ lives, so we incorporate their mobile phone videos into the material in our film.

We thus create a very subjective style, full of omissions and changes of perspective – close and unpolished. Elisa and Anthea, like many young people of their age, live in an absolute parallel world in which their own rules, values and scale of emotions exist. At their age, the smallest things can take on a huge meaning, and what is true in the adult world is far from being true here. The problems in families such as pressure to perform at work, alienation from children or separation are thus completely pushed into the background. In our film Elisa and Anthea go so far as to invent their own system of vigilante justice. They do terrible things to their classmates, but in their perception this is completely justified. They invent their own values, give each other support and orientation.

I want to make this peculiar and unique perception experienceable (or recall it) for the viewer by telling their story at eye level and close to real life”. 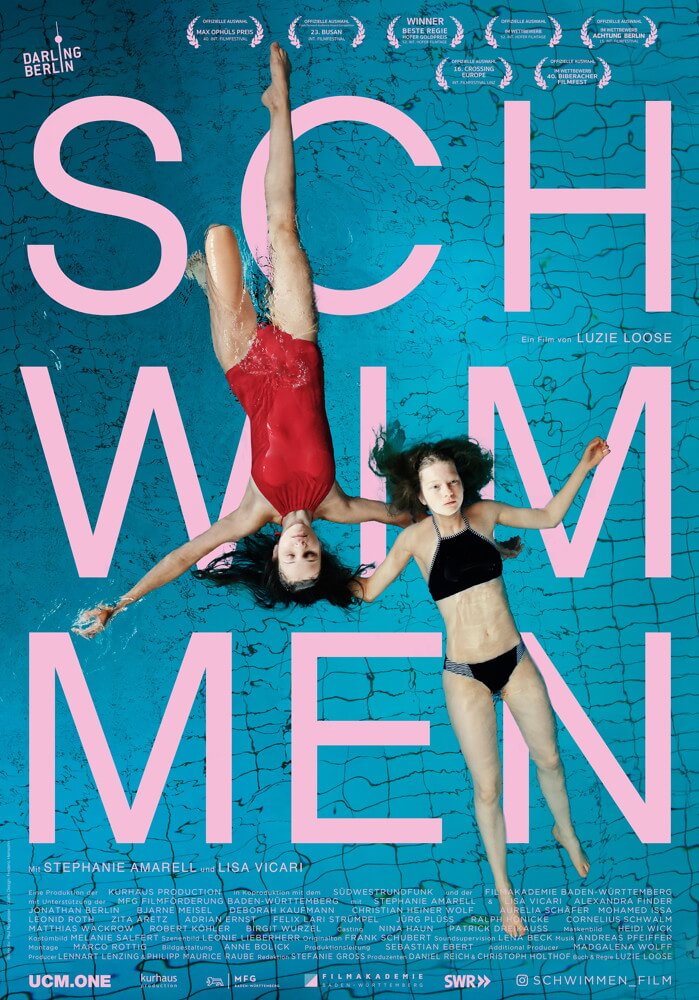 About the production company:

Kurhaus production is an independent film production company in Baden-Baden, which was founded in spring 2007 by Christoph Holthof and Daniel Reich. Kurhaus production develops and produces feature films, documentaries and documentary series for the German and international cinema and TV market. Especially through the success of “Unter Nachbarn” (“Golden Camera” for Charly Hübner) and “Freier Fall” (Berlinale 2013, over 100,000 cinema-goers) kurhaus production has made a name for itself in the film industry. In the last three years the production volume has increased significantly. The good cooperation with SWR and MFG Filmförderung Baden-Württemberg has proven its worth. Further co-production partners such as ARTE, ARD Degeto, KIKA & ZDF were added. The aim for the coming years is to further expand the infrastructure created in Baden-Baden.

Technical specifications of the DVD

Spiegel Online: “Director Loose (…) portrays this story of a devilish seductress in cold, blue-tinted pictures – and with a mercilessness that one would otherwise look in vain for in German cinema.”

Süddeutsche Zeitung: “In her intoxicating feature-length debut Swimming, Luzie Loose watches two Neukölln girls grow up.
She comes amazingly close to the shattered reality of her two protagonists, which is mainly due to the interplay of the leading actresses Stephanie Amarell (“The White Ribbon”) and Lisa Vicari (“Dark”).

Die Zeit: “Inside the plot, where Elisa struggles to figure out the isolation and loneliness of her own feelings of powerlessness, Loose succeeds in creating a fascinatingly precise and absolutely specific description of the state that is based on common patterns.”

Tip Magazin: “A harsh coming-of-age movie about the crux of the modern mobile and the lives of teenagers today.”

NDR culture: “Swimming” is about growing up, about the path into a world that you do not feel like belonging to, the best thing you can say about this movie is that it always manages to tell you nothing in grandiose ways – but rather  easy to be with his heroines.”

Emma: “A delicate film about the battlefield of a girl’s life in the mobile age.”

EPD film: “A coming-of-age film that is also a cinematic experience: Luzie Loose describes in her debut film the ups and downs of a girl’s friendship.”

Chrismon: “Luzie Loose’s coming-of-age film approaches bullying in a sensitive, realistic way and draws characters that allow them to identify with them.”

achtung berlin – new berlin film award: “Thoughtful and realistic contemplation of a generation facing new challenges due to the constant flood of images on the net.”

Kinder-Jugend-Filmportal: “An incredibly authentic debut film in which a victim of bullying becomes a perpetrator. Above all, however, the film is carried by the two leading actresses, especially by Stephanie Amarell, who was discovered at the age of eleven by Michael Haneke for his film “Das weiße Band”. She manages to play Elisa as authentically as if she were herself.”

The multiple award-winning coming-of-age film “Schwimmen” (English title: Swimming”) by director Luzie Loose will be released today by UCM.ONE via the Darling Berlin label on DVD and on VoD portals such as iTunes, Amazon, Google, Sony Microsoft and Vimeo. The film, starring Stephanie Amarell (“Dark”), Lisa Vicari (“Luna”, “Dark”) and Jonathan Berlin, deals with the highly…

The second film at the Darling, Berlin! Berlin, Sayang! Berlin, Teerak! online festival is “Swimming” (German title: “Schwimmen”) by Luzie Loose. “Swimming” tells the story of Elisa and Anthea, two very different girls, whose friendship gives them support and orientation during a difficult phase in their lives. They become best friends and develop a game in which they…

At last weekend’s International Film Festival for Children and Young Audiences “Schlingel” in Chemnitz, the movie “Schwimmen” (English title: “Swimming”) was awarded the DEFA Foundation’s 4,000 € sponsorship prize. Excerpt from the jury’s statement: “Uneasiness is the central feeling that the film shows as well as it evokes it. Uneasiness in one’s own body, uneasiness…

Today, the drama “Schwimmen” (English title: “Swimming”) starts in German cinemas nationwide. The film by director Luzie Loose runs in over 20 cities. “Schwimmen” (Darling Berlin) won the Gold Prize at the Hofer Filmtage 2018 and was awarded the Best Camera Prize at the achtung berlin Awards. “Schwimmen” was also honored by the FBW Jugend-Filmjury for…

Theatrical release of “Schwimmen” (Darling Berlin) with premieres in Hamburg, Stuttgart and Berlin

On Tuesday, Wednesday and Thursday, UCM.ONE is celebrating theatrical release of “Schwimmen” (Darling Berlin) in three cities. In the presence of director Luzie Loose, the Hamburg premiere will take place on Tuesday 10 September in the Abaton cinema at 8 pm. On Wednesday, the film crew also celebrates the Baden-Württemberg premiere from 8 pm in…

“Swimming” by Luzie Loose at the 13th Five-Lakes-Filmfestival 2019

Hof-Goldwinner “Swimming” (German: “Schwimmen” by Luzie Loose  from the label Darling Berlin is invited to the official program of the 13th Five Lakes Film Festival, which takes place this year from 4.-12.9.2019. The Five Lakes Film Festival (German: Fünf Seen Filmfestival, short: FSFF) has been inviting filmmakers and film enthusiasts to the summery Fünfseenland since 2007…