Los Reyes (english: “The Kings“) is the oldest skate park in the Chilean capital Santiago. But this movie is not primarily about the skaters, but about the real kings in this mircocosm: Football and Chola, two unseparable stray dogs that have found a home in the park between speeding skateboards and noisy teenagers.

The younger and livelier Chola loves to play with the balls that are lying around everywhere. Her favourite game consists in putting them on the edge of the bowls where the skaters show their tricks and to try to catch them just before they fall down. Football, the older of the pair, often watches her game umpatiently. He in turn is always carrying something in his mouth and finds great fun in dragging things around and gnawing them off.

The teenagers around them come from very different, sometimes troubled backgrounds. They all have their own stories and problems, which can be followed in the background in their conversations while the camera captures the subtle interaction between the two dogs as they are slumbering, chasing a ball or just mooching around.

The movie “Los Reyes“, released in the German-speaking territories on the film label NONFY Documentaries and shown through the distributor UCM.ONE, is a meditative, almost fairy-tale like and at the same time very touching documentary film which tells a whole world through the observation of two dogs.

About the directors by Iván Pinto (La Fuga):

Since its inception, the documentary work by Bettina Perut and Iván Osnovikoff has stood out for the risk and creativity in its themes, treatments and points of view. With seven feature films to their credit, their poetic journey is full of turning points and mutations that have accompanied the technological and cultural transformations of their time, challenging the most stable and conservative premises of what is meant by documentary filmmaking. Their work has gone from a very physical and gestural first record linked to the lightening of the cameras and the voyeur drive present in films such as “Martin Vargas from Chile” (2000) or “A Man Aside” (2002), which in turn emphasized the performative dimension of its protagonists (the boxer Martín Vargas in the first, and a fantasist manager in the second); towards a visual stylization that began with the exercise of “inverted ethnography” “Welcome to New York” (2006), found a hinge in the ethical exploration of the field (and its limits) in “News” (2009); and reaches a climax in his last work “Surire” (2015), a documentary about a salar in the highlands where landscape, nature, animals and humans are observed from a glance that combines the sensory with the materiality.

Before conclusions, the documentaries of Perut + Osnovikoff raise questions; they interrogate the limits and the common senses. This is the case, for example, of its two entries around the social memory, on the one hand the “Clever Monkey Pinochet versus La Moneda’s Pigs” (2004), where groups of school children represent the military coup through acting improvisations where the game is combined with the parody, speaking of a conflicting present that inhabits the bodies, an issue that they emphasized even more in “The Death of Pinochet” (2011), a “social fresco” around the day of Pinochet’s death that established the body as a horizon of ultimate sense where the public performance of politics is established (in their passions, exhaustion and decay). Although their work has been discussed and even marginalized from some circuits, their proposal has only grown and opened up new avenues, including documentary cinema as a plastic and social exploration. 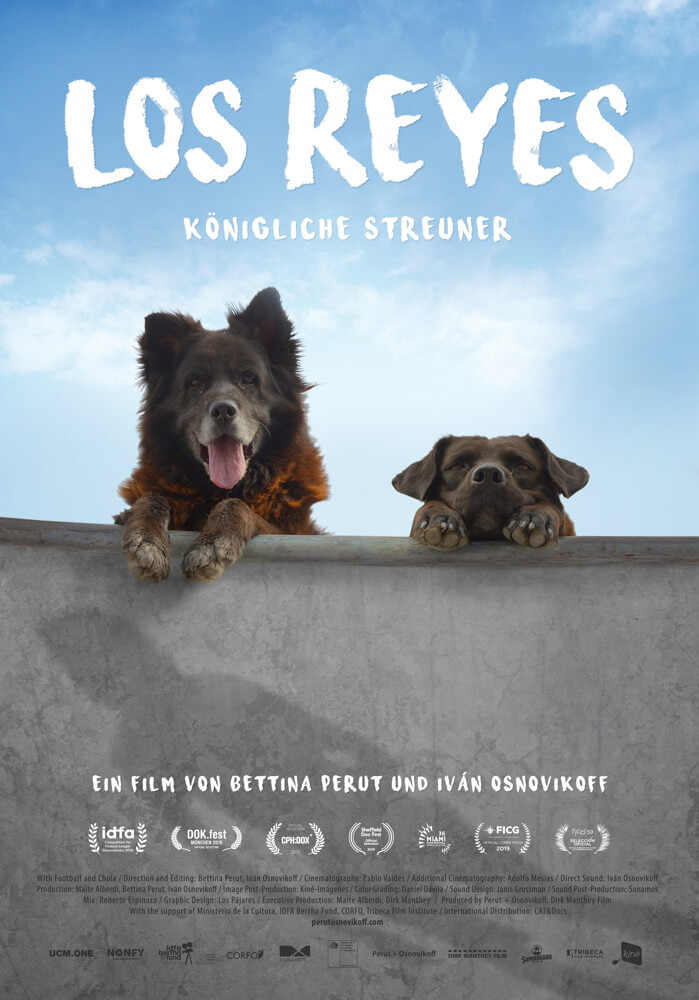 Interview with the directors:

“How did the idea of making Los Reyes originate?”

Bettina: “In 2009, for the day of his birthday, I gave Iván a skateboard to go back to riding. He had not skated for 25 years and dreamed of doing it again. So he started going to the Los Reyes skatepark every week. As he came into confidence with the young skateboarders, he would listen to conversations that he told me later and that were very interesting. At the beginning of 2013 the idea of making a film in Los Reyes, based on the homies, appeared. At first I was not very enthusiastic about working with teenagers, but as the idea developed I became convinced. “

Iván: “The financing of the project was quite fast and by the end of 2015 we were already recording. There also began our problems: the skaters did not let go with the camera, they were inhibited, others overacted, their conversations were empty, it was not working. In addition, Bettina was dissatisfied with the visual style, she thought that the form was conventional, that it was not coherent with our artistic identity, and that we were falling squarely into reality television.”

“When did the dogs appear?”

Bettina: “Football and Chola appear right at the worst of the crisis. One day Iván was skating in Los Reyes and I called him on the phone to tell that the film had failed, that it had to be aborted. He tried to convince me that this alternative did not exist, that we had to continue and among many other things he tells me that right at that moment there were a couple of dogs playing in the bowls with a ball, that I had to see that.“

Iván: “So the next day Bettina went to see the dogs and was captivated. “This movie has to be about these two dogs,” she said. I did not agree. We had to include the dogs but there was no reason to eliminate the skaters! For Bettina the dogs were the object of audiovisual experimentation that we were looking for and that should solve our problems.

Bettina: “In any case, I convinced Iván that from then on we had to concentrate the shooting on the dogs because at any moment something could happen to them, while the skaters were going to be always there. Any producer would have panicked with such a change but Maite Alberdi and Dirk Manthey always supported us. The same for Pablo Valdés, our cinematographer, and the funds that backed the film. We are very thankful.

Iván: “And we spent 10 months recording the dogs. In the end Bettina’s intuition that the film had to be about Football and Chola was imposed on its own. She was absolutely right. To record the dogs for months was to investigate them in detail, discover dimensions and unexpected relationships, surprising images. And the skaters continued in the movie but in an underground way, becoming part of the sound atmosphere of the world of dogs, of what surrounded them.”

“What did the skaters say when they saw that you were recording Football and Chola?

Bettina: “At first they got a little misplaced, they did not understand what was the grace of this dogs. But for us it was very good because from then on they were uninhibited. As knowing that they were no longer the protagonists, they began to relax and to be themselves in front of us and in front of the camera. Because although in the movie we only hear their voices and never see them, the recordings were always with a camera.”


“What was the result of this process?”

Iván: “Finally, what turned out was a film about a microcosm, the Los Reyes skatepark, seen from the day to day of a couple of wonderful dogs that love each other, Football and Chola, and that live surrounded by insects, highways and human adolescents trying to emerge in life in a somewhat clumsy way. What we are proud of is that all these dimensions intertwine and create a powerful cinematic experience, it seems.”

“Los Reyes is a bold and successful experiment: it puts the animals’ perspective at its centre, not as a metaphor for anything human, but for its own ends.“ (The Guardian)

“The kids’ ambling chatter, the dogs’ routine of rest and play, lull us into a contemplative state, which allows us to better appreciate the mystery of existence.“ (The New York Times)

“Built four-square around the considerable screen presence of inseparable best-pal canine co-leads Chola and Football, the German co-production is low on incidents but high on atmosphere and unassuming charm.“ (Hollywoodreporter)

“Bettina Perut and Iván Osnovikoff’s laid-back documentary is a slow burner but has a hypnotic charm. (Screendaily)

“Like an afternoon spent skating or sunbathing at the park, the film is an escape from outside stresses, a breath of freedom in a busy world.” (Variety)

As of today, the acclaimed documentary “Los Reyes – Königliche Streuner” (English title: “Los Reyes”) by directors Bettina Perut & Iván Osnovikoff is available on DVD in Germany, Austria and Switzerland through UCM.ONE’s NONFY Documentaries label. Summary: Los Reyes (“The Kings”) is the oldest skate park in the Chilean capital Santiago. This film, however, is not…

The time has come: Today the wonderful documentary “Los Reyes” by Bettina Perut and Iván Osnovikoff officially hits German cinemas, distributed by UCM.ONE on the NONFY Documentaries label! The release premiere will take place tonight at 8:30pm at the B-Ware Ladenkino in Berlin, the two directors will be joining us from Santiago de Chile via…

The acclaimed documentary “Los Reyes” (German title:”Los Reyes – Königliche Streuner”) kicks off the open air cinema season of the Mobile Kino at the Alte Münze, Molkenmarkt 2, in Berlin Mitte tonight at 9:45 pm. The two directors Bettina Perut & Iván Osnovikoff will join from Chile via video for a film talk and Q&A. Tickets and further information…

The film “Los Reyes” will be released on the film label NONFY Documentaries via the distributor UCM.ONE in German-speaking countries on 10 June 2021. However, the film is not primarily about the skaters of the well-known and oldest skate park Los Reyes in the Chilean capital Santiago but about the true kings of this microcosm:…

German premiere of the “Los Reyes (NONFY Documentaries) at the DOK.fest Munich

The documentary “Los Reyes” (NONFY Documentaries) celebrates its German premiere at Dok.fest Munich (May 8-19, 2019). The film tells the story of the Chilean skatepark-youth in Santiago from the perspective of two street dogs Chola and Futbol. The two strays listen to the conversations of the teenagers, who day after day hang out on their…