Diagnosis: schizo-affective and bipolar. What does that mean? Director Tim Lienhard gives Susan a stage, portrays her as a film diva and combines her magnetizing screen presence with her relentless openness to an opulent, captivating performance.

Susan, in her early 50s, is a very attractive woman. But the half Italian, born at the beginning of the 60s in Berlin, is ill. She is bipolar and has a schizoaffective disorder. She proudly pronounces to the camera that she has lived a thousand lives, but at the same time she emphasizes that her life ended at the age of 11. Because at that age she was sexually abused.

Despite a good school performance and the attempt to take up a bourgeois profession, she never led an ordinary life. The queen of the Berlin techno clubs of the 90s, once a drug dealer and globetrotter, still defends her independence until today. This has its price, because Susan lives on social welfare in Berlin and has a caretaker. She is an alcoholic and finds herself in a co-dependent relationship with a much younger man. A rape during the time of the shooting releases states of fear in Susan. But she speaks openly and offensively about everything that has happened to her. So this film is also a highly topical examination of sexism from the perspective of a beautiful, abused woman.

Her suffering from an obsessive-compulsive disorder is also a subject of the film. With her impressive talent to perform, to make herself the center of the film and to do so in a very strong, self-confident and reflective way, Susan captivates the filmmaker Tim Lienhard, whom she met 25 years ago at the Loveparade in Berlin.

He stages her to a lament by Georg Friedrich Händel and contemporary music by the pop band Kid OK, thus unfolding excitingly surprising views of a fascinating woman. “Character One: Susan” is the portrait of an extraordinary woman.

Born in 1960 in the Black Forest (Villingen), he graduated from high school in Constance and studied theatre, film and television sciences, German phililogy and history at the FU Berlin and the University of Cologne. Since 1983 Tim Lienhard has worked as a TV reporter for WDR and ARD and for over 25 years for Arte. He has produced over a thousand magazine reports for German and French television and well over 70 television features/documentaries. His first independently produced and self-financed feature film “One Zero One – The Story of Cybersissy & BayBJane” was released in 2014, with an official cinema release and corresponding media attention. This 90-minute documentary about two drag-queens was shown at over 50 international film festivals (German premiere at the Hofer Filmtage 2013) and received several international awards for best documentary in 2013 and 2014. With “Character One: Susan“, Tim Lienhard has continued to maintain his complete independence from clients and financiers. 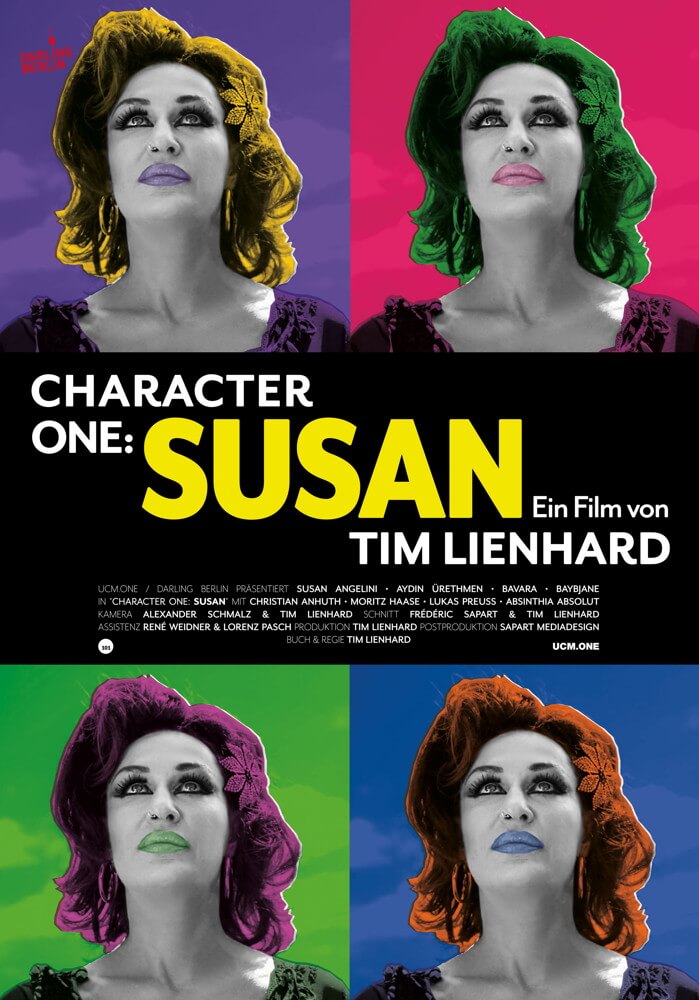 “In the early 90s, at the end of the Love Parade. At the time the Love Parade only crossed Ku’damm and ended at Wittenbergplatz. Suddenly, Susan stood before me. A 1.80m tall woman, who was perhaps only 1.75m tall, but seemed larger than life. So much personality, so much glamour, high heels and perfect make-up. It was love at first sight. She claimed that a picture of the both of us had been on the front page of the BZ the day after. Pure cliché: Two celebrating Loveparade people who looked funky and sexy. Then we partied through the 90s. Susan was always high, she tells all this in the film. I was completely abstinent, the counter-programme of Susan and yet a magnificent addition. When I was looking for an assistant for a TV production in Rimini, I hired Susan, because although she was born in Berlin, her father came from near Rimini. The production company fell in love with Susan’s photos and hired her not as an assistant but to be right in front of the camera. Only problem: her hair. The first thing I had to do was take her to Rimini to buy a wig. With this wig she made bella figura at her first and so far only appearance on television.

No question, I was fascinated by Susan’s performance right from the start. Where she was, there was performance. It was not staged, it was always real. And incredibly amusing. Trained in nightlife, with a fascinating language. Great entertainment. So it was only a question of time when I was going to make a film about this great self-performer. Since Susan had literally disappeared for more than a decade, I couldn’t pick up the thread again until around 2015. She was immediately willing to have her portrait taken, loved the camera, especially when cameraman Alexander Schmalz was behind it. And so a film came into being for which shoots were cancelled as often as they had been confirmed, had to be postponed because Susan was indisposed.

There was always something going on, and it wasn’t easy. But we hung on and we held on. Always with the reward of great, sometimes extremely crass entertainment. Not everything was good for the public. I had a responsibility for Susan. I didn’t want to hurt her. It was a tightrope walk. Apparently it was successful, at least we survived every crash and she was highly satisfied with the result at her first private screening. “Tim, I love you!” she said every five minutes during this first screening, in the company of a few friends.

At the first screening during the Achtung Berlin-film festival, Susan was constantly delivering live commentary. These oscillated between approval and criticism. An adventure called Susan, a journey that I was happy to embark on and which is probably far from over.

Susan is one of the most dazzling personalities I know. Her directness has a power that blows your mind. Susan is truly stunning and if I have succeeded in expressing this in my colourful, authentic portrait, then I have achieved my goal. I worship Susan and my film can certainly be seen as a declaration of love. Perhaps in exactly the same way that life was celebrated at the Love Parade with “Peace, Joy, Pancakes” and lots of drugs, at the abyss of a fire-breathing volcano. In a counter world.”

“When you see such a documentary film about a person and this documentary film gets so completely involved with this person, who is a ravishing personality, but also a juicy imposition, even for herself, […] the person becomes very familiar. ” (radioeins)

““Character One: Susan” has become a very intimate portrait. Intimate, but not voyeuristic.” (Kino-Zeit)

“The end result is an intimate insight into an everyday life with schizoaffective disorder” (Programmkino.de)

“his colourful puzzle, which is called Susan, is presented by Tim Lienhard sometimes acting like a diva, almost theatrical in neon colours, sometimes raw, sometimes very pragmatic in black and white. The look of the documentary is not only a beautiful reflection of her, at the same time it also reflects Berlin. Raw, blunt and serene is the portrait of a woman who has gone through and experienced a lot.” (Film-rezensionen.de)

“Character One: Susan” (Darling Berlin) to be released on DVD today

On 25 September 2020 the fascinating documentary film “Character One: Susan” by Tim Lienhard will be released on DVD. The film was launched in cinemas across Germany on 16 January 2020 by UCM.ONE on the Darling Berlin label. The director met his protagonist at the Loveparade in the early 90s and could not resist her charm.…

The documentary “Character One: Susan” has its cinema release in Germany today. Director Tim Lienhard presents the film today in Cologne in the Filmpalette and tomorrow and on Saturday together with his protagonist Susan Angelini in Berlin. The film will be shown on Friday, January 17, 2020, at 8:30 pm at the City Kino Wedding…

The emotionally touching documentary “Character One:Susan” by director Tim Lienhard will celebrate its theatrical release on the film label Darling Berlin on Friday, January 17, 2020, at 8:30 pm at the City Kino Wedding in Berlin. It had its world premiere at the achtung berlin festival in April 2019. The director and his protagonist will…

“Character One: Susan” competing at the film festival “achtung berlin”

The new film by Tim Lienhard “Character One: Susan”, which Darling Berlin will be releasing next year (2019), will be screened by achtung berlin this year. The documentary is about Susan. Susan is in her early 50s and a very attractive woman. The half-Italian, born in the early sixties in Berlin, tells her life. That…