The film “Nico“, for which director Eline Gehring wrote the screenplay together with cinematographer Francy Fabritz and producer and leading actress Sara Fazilat, celebrated its premiere in Germany at the Max Ophüls Prize Film Festival in January 2021. Sara Fazilat also won the prize for “Best Newcomer Actress“ there. She was also awarded the “No Fear Award“ as producer at the First Steps Award 2021 shortly afterwards. The international premiere took place at the 24th Shanghai International Film Festival in the same year.

The self-confident and lively German-Persian Nico loves her job as a geriatric nurse and is popular with everyone because of her easy-going and sympathetic manner. She enjoys the Berlin summer with her best friend Rosa until a racist attack suddenly tears her out of her carefree everyday life. Nico realises that she doesn‘t belong as self-evidently as she always thought. Haunted by flashbacks of the terrible attack, she withdraws more and more into herself.

Not only Rosa loses touch with her, but also her clients fail to recognise the young woman. Nico feels that things cannot go on like this and turns to the gruff karate champion Andy.
With him she begins a tough training programme which helps her to channel her anger and discover her own strength, but she also loses touch with herself. When Nico eventually meets the Macedonian woman Ronny, a connection develops between the two that causes Nico to question the path she has chosen.

“Nico” is an important and moving film whose stirring leading actress makes the audience feel every moment of her painful healing process.

>> Because this film started as a joint project, this is a directing and production statement. <<

“Make a film about racism? Yes! But not only. In our opinion, diversity in terms of origin, body and sexuality must be represented less stereotypical in the German film and television landscape. We grappled with anger and apparent helplessness that even today racism and sexism are part of our everyday lives.

In order to express this anger as authentically as possible, we opted for film characters that offer large areas of identification. Not only the actors but also the film team worked with improvisational elements from the start. We worked with a small film team and often the stories of the film became our reality. It was not a surprise but still a shocking matter that during the shoot an angry German man shouted at us “that we should speak German since this is Germany here”, which encouraged us and showed us how important it is to make this film.”

Eline Gehring began her career in 2006 as a camerawoman and editor for German News reporting in Paris, Prague, Kiev and Berlin. She shot a documentary for the German Bundestag in Saint Petersburg and in 2008 she worked for Deutsche Welle in Cairo.

Her stations also took her to South Africa, where she made short films, documentaries and social spots for NGOs in 2011.

In 2013 she began studying direction at the German Film and Television Academy Berlin (DFFB) and directed short films that premiered at international film festivals. In 2016 she worked as a co-director on the documentary “Helmut Berger, meine Mutter und ich“, produced by Edition Salzgeber.

In the same year she started working on her feature film debut “Nico“. In 2021, “Nico” wins the Young Talent Acting Award for Sara Fazilat in the lead role in the feature film competition of the 42nd Max Ophüls Film Festival.

In addition to the First Steps Award in the „No Fear“ category for the production, “Nico” also won the QueerScope Debut Film Award, the Debut Film Award of the 43rd Biberach Film Festival and the feature film competition of the Mainz Film Festival. With her second feature film, “Motherland” (working title), Eline Gehring completes her studies at the German Film and Television Academy in Berlin. 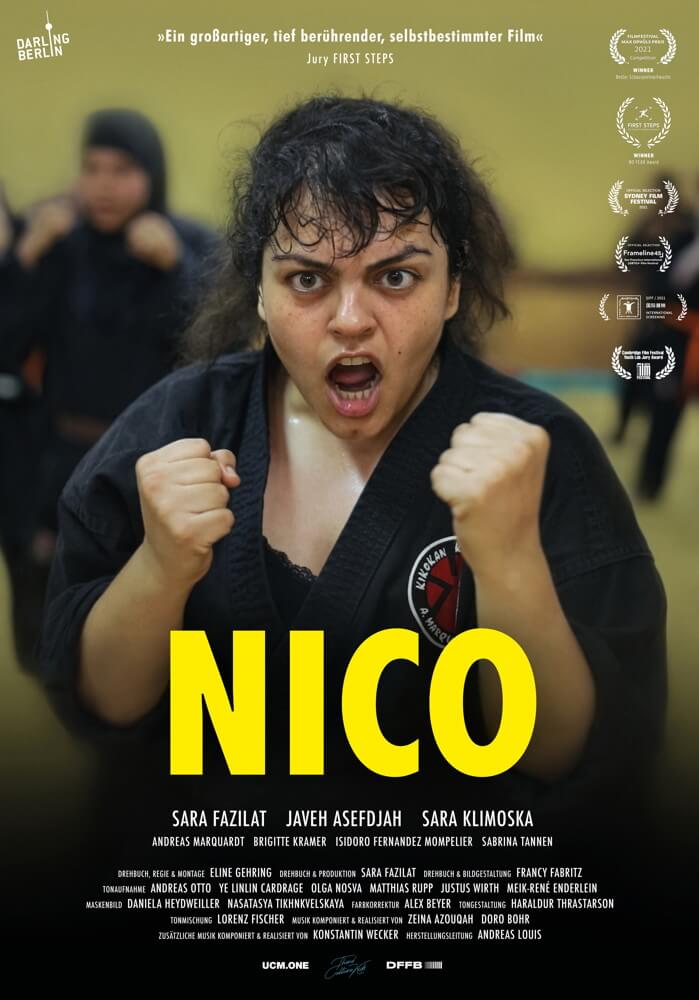 After graduating from high school in Bremen, Sara attended the RADA (Royal Academy of Dramatic Art) and Guildhall School of Music and Drama in London. In 2012 Sara Fazilat moved back to Germany to study film production at the DFFB in Berlin and at Columbia University in New York. In 2014 she took part in the „Making Waves“ workshop, where she studied film marketing and distribution.

A year later, her film “Nicht zu früh, nicht zu spät” (co-screenwriter) premiered at the Cannes Film Festival and was nominated for the Golden Sparrow (2016).

At the 64th San Sebastian International Film Festival, Sara Fazilat was a member of the student jury for the category International Film. In 2017 she was a VGF Young Producers Scholarship Holder and was selected for the Berlinale Talents for the film “Nico“.

The screenplay “Louise“, which Sara co-wrote with River Schmölders and Anna Maria Roznowska, was selected for the Central European Feature Project in 2018. In the same year, Sara received a scholarship from the Studienstiftung des Deutschen Volkes and was selected for the VGF International Producers Programme in Cannes.

Since 2018, the renowned German producer Florian Koerner von Gustorf has been her mentor. The film “Revolvo“, which she produced, won various prizes in 2020 and was invited to Cannes by German Films. Her film “Jiyan” won, among other international awards, the Ecumenical Jury Prize at the Max Ophüls Festival 2020.

In 2020 Sara Fazilat founded the production company Third Culture Kids. “Nico” is her graduation film at the Deutschen Film- und Fernsehakademie Berlin (DFFB),, she played the leading role and produced the film which premiered in 2021 at the Max Ophüls Film Festival, where Sara received the award for Best Young Actress. Later that year, she received the “First Steps No Fear Award” as a producer.

Francy Fabritz is a Berlin based cinematographer and director. Her films deal with queer-feminist topics told in a humorous way.

Her latest works as a director are the short films “Etage X” (2016) and “Revolvo” (2019). Both films received „Rating Particularly Valuable“ (German Film and Media Rating FBW), had their German premiere at Hof International Film Festival and were selected for the Cannes presentation of Short Tiger Next Generation by German Films. In 2016 “Etage X” celebrated its world premiere at the Locarno Film Festival.

In 2020 Francy Fabritz was a member of the Nest Jury at the 68th San Sebastian International Film Festival. In 2021 she was selected for Berlinale Talents.

“Nico” is her first feature film as a cinematographer and co- screenwriter. Her latest work as cinematographer is the innovative queer talk show Tomorrow TV, a project funded by MBB (Medienboard Berlin Brandenburg). Francy is currently working on her graduation feature film screenplay.

Javeh Asefdjah was born in Tehran and completed her acting studies at the Felix Mendelssohn Bartholdy Academy in Leipzig in 2004. She works as an actress at various theatres, in film and television and as a dubbing artist. While still a student, she played “Betty Paris” in Arthur Miller‘s “The Crucible” at the Staatstheater Braunschweig. After her subsequent permanent engagement in Bremerhaven, she freelanced at various theatres, including the Author’s Theatre Days at the Thalia Theatre. Other engagements include the Maxim Gorki Theater, Hans Otto Theater, Heimathafen Neukölln, HAU, Ballhaus Naunynstraße and a guest engagement at the Deutsches Theater Berlin.  In 2013 she travelled to Baghdad and to the north of Iraq with the dance theatre production “The House of Bernarda Alba” for the Iraqi-German Theatertreffen. The project was awarded the main prize for the best scenic performance by an international jury.

Since 2001 she has appeared in front of the camera for numerous film and TV productions. On screen she can be seen in the Berlinale competition film “Shahada” by Burhan Qurbani, among others. She also stars in “Salami Aleikum” and “Krach der Stille” as well as in the short film “Stillstand“, directed by Sara Fazilat, the producer and leading actress of “Nico“. Since 2009 she has also worked as a language mediator for the Workers’ Welfare Association (AWO) and Amnesty International in asylum procedure counselling for refugees from Iran and Afghanistan and holds theatre workshops for young people.

Born in Northern Macedonia, Sara Klimoska graduated from the Faculty of Dramatic Arts in Skopje and performs successfully in the world of theatre and film, both nationally and internationally. Her most recent role is in the film “You Won’t Be Alone” directed by Goran Stolevski (2021). In it she stars alongside Noomi Rapace and Anamaria Marinca, among others. Previously, Sara Klimoska, under the same direction, starred in “Would You Look At Her“, which won the Jury Prize for Best International Short Film at the 2018 Sundance Film Festival. In 2019, she was cast in the lead role in “Willow” by Academy Award-nominated director Milcho Manchevski. Among other awards, “Willow” was in the feature selection at the European Film Awards.

Sara Klimoska‘s recent roles include a supporting role in the German feature “Nico” and lead roles in two productions: “Sabatier Effect” by Eleonora Veninova and director Igor Aleksov‘s feature debut, “Lena I Vladimir”. In 2020, Sara Klimoska received the award for Best Film Actress in North Macedonia and in 2021 she was one of the ten “European Shooting Stars” to be awarded at the Berlin International Film Festival.

“Nico succeeds in what only a few German productions manage: the effortless oscillation between touching scenes and fine humor.” (Zeit.de)

“One of the most touching films of the German cinema year.” (Süddeutsche Zeitung)

“A refreshing, raw, strong piece of cinema. And a great discovery of the 2021 cinema year.” (Berliner Morgenpost)

“The partly improvised low-budget film impresses with its narrative force and the unpolished authenticity of its characters.” (Cinema)

“This fine, gripping debut [tells] a stirring story of friendship, self-empowerment and overcoming trauma, without Hollywood catharsis and beyond clichés, but still with a spark of hope.” (Epd film)

“Sara Fazilat is an absolute stroke of luck for German film.” (rbb Kulturradio)

“An encouraging, lively film about a self-empowerment […] One of the most beautiful Berlin films of recent years.” (Radioeins.de)

“The narrative fury of the film really blows you away. […] A very strong, angry, worth seeing film.” (Deutschlandfunk Nova)

“NICO is not only courageous, Eline Gehring’s feature film debut is above all angry. A rage that spills over in this strong, important film by a new generation of filmmakers*.” (NDR Info)

“Empathetic and highly emotional. […] The makers have succeeded in making a stirring, humorous and reflective film about a topic that is unfortunately still omnipresent.” (dpa)

“[Eline Gehring] shrewdly breaks stereotypes and sketches a world in which diversity is not a dirty word and which, despite all seriousness, remains permeable to humor and goodwill.” (Sueddeutsche.de)

“With its outstanding lead actress, who is convincing in every emotion, and its close look at people and their surroundings, NICO has achieved this goal [ of creating its own realities] in every respect.” (Kino-zeit.de)

“The drama about self-discovery and self-assertion is […] worth seeing, while also being strongly acted.” (Film-rezensionen.de)

The feature film “Nico” by director Eline Gehring, distributed by UCM.ONE on the Darling Berlin label and released in cinemas on 12 May 2022, is available everywhere as of today both on Blu-Ray and DVD. At the same time, it can also be purchased and rented from download portals. “Nico”, for which Eline Gehring wrote…

It was announced last night: “Nico” by Eline Gehring won the Jury Award at the 36th MiX Festival of LGBTQ + Cinema and Queer Culture in Milan! The well established film festival ran from 16 to 19 June in the capital of Lombardy, it is the oldest queer film festival in Italy. The jury explained their…

🎬 Bavarian Film Award for Sara Fazilat for her portrayal of “Nico”

🎬 Sara Fazilat nominated for the German Film Award for her role in “Nico”.